Dr. Jeter graduated from Millsaps College in Jackson Mississippi in 1992 with a degree in Classical Studies. After graduation his wife gave him a Basset hound puppy, and after several visits to the local veterinarian he decided to pursue a new career path. This led him to the University of Tennessee, where he graduated with his DVM in 1999.

He is married to Julie Jeter, a physician at UT in the Family Practice Department. They have two children, Emma and Wesley.

Dr. Hawkins has been with us since 2012. She has four dogs-Champ, Roxie, Shiloh, and Little Bit and a cat named Jerry. She has two kids, Allyn and Garrett.

Dr. Kristi Sharpe is from Robbins, TN which is about an hour northwest of Knoxville. She is a 2012 graduate of the University of Tennessee, College of Veterinary medicine, and has been with Rocky Hill Animal Hospital in some capacity since graduation.

Dr. Kristi resides on a farm in Robbins with her husband, Justin, with their two young children, a son, Matthan and a daughter, Thea. Living along with the family are two dogs, four cats, 12 Nigerian Dwarf goats, 15 chickens and one guinea.

In her spare time, Dr. Kristi makes homemade skincare products, enjoys working on the farm, and spending time with her family.

Beth joined the practice in January 2018 and is new to the veterinarian industry. Her work experience has varied from a family practice office manager, a banking officer, to owning her own business. Beth graduated with a Master of Business Administration (MBA) from George Mason University in VA and a Bachelor of Arts degree in Business Administration from Frostburg State University in MD.

Beth is active in her church and enjoys yoga, paddle boarding, and traveling to visit her children.

Beth and her husband, Tim, have three grown children: Catherine, Caroline, and Blake 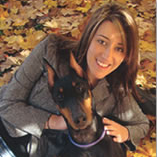 Haley’s career in grooming started when she was only ten years old and she began showing Papillions with her mom. She traveled around the country showing, handling, and breeding dogs of various breeds. At the age of eighteen, her full-time career as a Pet Stylist began. Haley completed the PetSmart Grooming Academy in 2006 and truly found her calling. Haley wants you to know, “Any pet that comes to me to be groomed will be treated with as much love and affection as if they were one of my own pets.”

Haley’s love for animals, however, goes far beyond just dogs. Currently, she has three dogs named Duke, Kaycee, and Kara, as well as two horses. She understands the importance of loving and caring for each pet at home, boarding or the grooming salon.

Jennifer adds some international flare to the clinic! Hailing from the Caribbean island of Barbados where she grew up, and Antigua where her parents still remain. At 16 she moved to Florida, graduating from Broward Community college with an A.A. Degree in Business Administration and then moved to Knoxville to be closer to her sister. Now she has a wonderful family with roots in the south, a sweet husband, Dan, and a horse crazy teenager, Leilu. Although she loves to visit the white sandy islands of her childhood, the Smoky Mountains offers a different sort of paradise.

Jennifer has a deep love and respect for all animals and considers herself lucky to have an opportunity to work with them daily. Currently, she has three dogs, Rogue, Ringo, and Rue. She also takes our clinic mascot, Rocky, home with her every night! Hopefully, you will meet some of them hanging out behind the front desk (they make great greeters!!) So if you see a little car with a Husky, a Malanois, a Pit Mix, or a very large, white Great Dane in the back, give her a wave.

Calie was born and raised in Denver, CO. She moved to Knoxville to continue her education at UTK with a concentration in microbiology. She has been a practicing vet tech for 10 years in a variety of small animal, exotic, and specialty practices. Calie joined the Rocky Hill team in May 2018. She has 2 cats at home, Guinness and Grimm, who keep her on her toes. When not at work Calie enjoys photography, gardening and reading.

Kayla was born and raised in Milton, VT where she attended Vermont Technical College graduating with a Bachelors’s Degree as a Veterinary Technician. She then went on to work in Specialty Veterinary Medicine as a Surgical Technician. After 4.5 years in Specialty, she decided to make the move from her country home in Vermont to Knoxville with her 2 dogs, Squidley and Squishy. When not at work Kayla enjoys hiking, reading, and exploring all that Tennessee has to offer!

Mara was raised in small-town Virginia and moved to Tennessee after getting her Bachelors’s degree in Biology from Roanoke College in 2019. She was a high jumper in college but now likes to spend time with her family and 2 dogs, Luna and Dio. She strives to make every patient she comes in contact with feel like family.

Zach was born and raised in Lexington, SC. He joined the United States Marine Corps at 19 and traveled the country and world for 4 years until deciding that he wanted to further his education. He attends UTK and is majoring in Animal Science with a pre-veterinarian concentration. Before joining the Rocky Hill family, he practiced as a vet assistant at an animal emergency room for 2 years. He has two lovely pups named Jax and Milo and three cat friends named George, Boots, and Ava

Kelsie grew up in the foothills of the Great Smoky Mountains in East Tennessee. She graduated from Lincoln Memorial University with an Associate’s Degree in Applied Science in 2010. Shortly following graduation, she passed the VTNE to become a licensed veterinary technician. It has always been Kelsie’s dream to work with animals in some capacity, and her love for animals has only grown during her time working in veterinary medicine. Building meaningful, ongoing relationships with her clients has been one of the most rewarding aspects of her job.

Outside of work, Kelsie enjoys spending time with her husband, Josh, their two children, Calliope and Kingsley, and their 3 pets: Scout, Knox, and Amelia. They are a “Disney Family” and go to Walt Disney World in Orlando as often as possible! 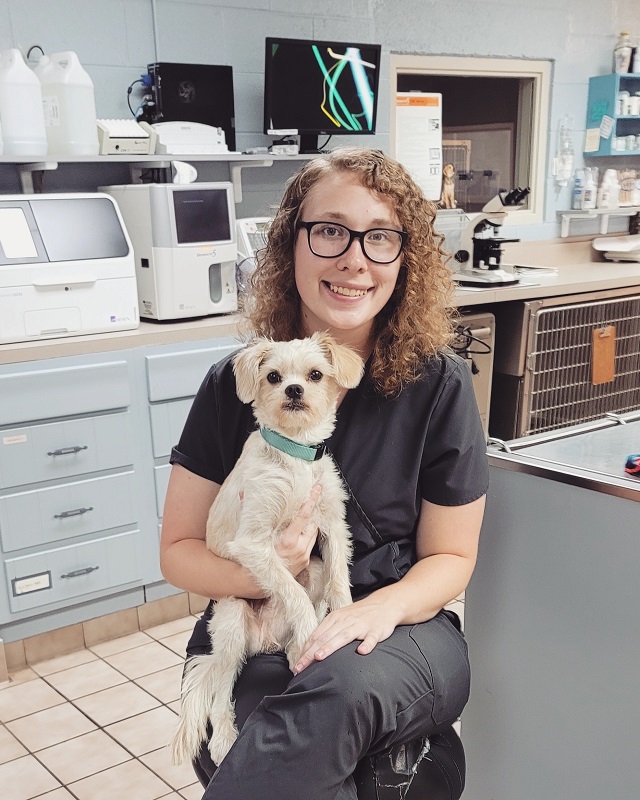 Jordan was born in Tullahoma, TN, and grew up in Estill Springs, TN. She attended Motlow State Community College where she earned an associate’s degree. Jordan then moved to Knoxville in 2018 to attend UTK studying animal science (Bioscience concentration) along with wildlife and fisheries. While a student, she got the opportunity to intern at Zoo Knoxville where she worked with all kinds of birds that were a part of the Shows Department. Jordan graduated with a bachelor’s degree in May 2020. Before moving to Knoxville, she worked at Bubbles and Bow Pet Spa where she worked for the groomer and worked in kennels. Jordan started working at Rocky Hill Animal Hospital in August 2020 as a bather and was recently promoted to the position of kennel manager. When Jordan is not at work, she is most likely at home with her dog, Leo, and dwarf hamster, Cotton. 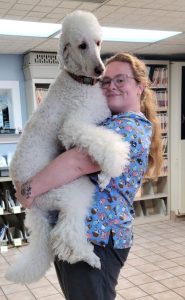 Rebecca Brown was born in Indiana, and raised in Florida & Tennessee. She graduated from Maryville high school in 2015 while staying home to care for her disabled mother. In 2016 she met her partner Jacob, and shortly after moved to Knoxville & had their little girl Amelia Hermione Rose. They live together in west Knoxville with their Australian shepherd Sybil, and two cats Izzy and Willow. Becca’s favorite hobbies are reading about history, spending time in nature with her family, & learning and practicing taxidermy to give animals new life and purpose. It is Becca’s mission to make sure every pet that comes to RHAH feels comfortable and has a great experience. She loves your pets like they are her own and loves to give them the star treatment.

Kelsey was born in Knoxville, Tennessee. She moved to Johnson City Tennessee and got her bachelors degree in psychology at East Tennessee State University. She has one dog, who is her world named Rogue. She loves animals and loves to cuddle the patients when they come in.

Font Resize
Contrast
Accessibility by WAH
Call Us "> Text Us